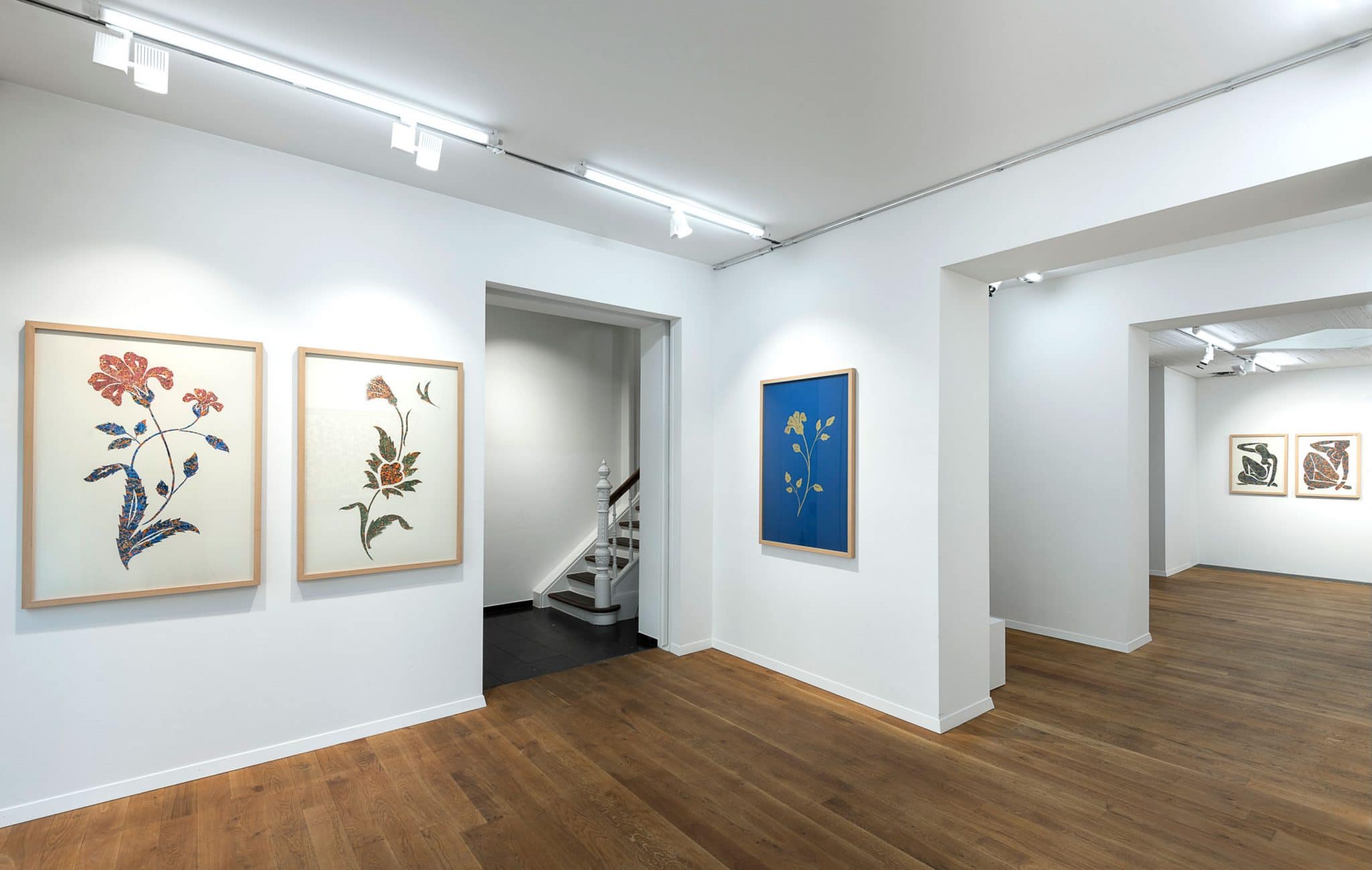 Anna Laudel Düsseldorf showcases “Assimilation” by Turkish artist ​Onur Hastürk​, recognised by his combined style of Islamic painting and design with contemporary art. “Assimilation” ​is Hastürk’s debut exhibition in Germany, marking the largest display of the artist’s works to date and will be on display between ​30 July – 31 October 2020 at Anna Laudel Düsseldorf.

A visual artist specialised in the art of classical Ottoman miniature painting, Onur Hastürk pulls freely from the numerous artistic cultures of Islam and places them in new conversations with art of the modern West, from Henri Matisse to Andy Warhol. In doing so, he has created a contemporary Islamic art with a unique attitude and style, generated from these transcultural and transhistorical intercourses.

Within the exhibition, Hastürk presents his works within 3 compelling series: ​Respect to Matisse, Respect to Warhol, and Classical Miniature.

Respect to Matisse
Hastürk’s ​Respect to Matisse series, is a contradiction produced between the modern and the traditional. Matisse’s paintings include the naturalism and tactility of the European painting tradition, rhythmic patterns of Islamic carpets and the shallow compositional areas of Islamic miniature painting.

His work doubles as Islamic art’s returning gaze on Matisse’s Islamic-inspired modernism, where the nameless Islamic artists are eclipsed by Matisse’s breakthrough. With the eyes of a miniaturist, Hastürk makes the loose brush strokes and solid colors visible with sharp lines. Artist also interprets Matisse’s extraction of Oriental motifs on his paintings and cutouts for a new kind of ornamental decoration.

The chapel vestments of a priest designed by Matisse can be seen as a counterpart to the series of talisman caftans that Hastürk made. Also in the series, the limiting and abstract figures of Matisse’s painting “La Danse” (1910) reappear by Hastürk with connotations between the curved ornaments of İznik Tile.

Like Matisse’s paintings, Warhol’s canvases and ready-made sculptures reflect Hastürk’s practice. Hastürk engages with a different dimension of Warhol’s oeuvre in the series Respect to Warhol​ and explores the impact of the artist’s figures and, it’s attraction to gold with Islamic art practices.

In 1957, Warhol published ​A Gold Book​, a b​ound volume of 19 offset lithograph prints depicting flowers, high-fashion shoes, and magazine models, most of which were printed on gold paper. A major part of the images depicts male figures, all boyish, effeminate, delicate, smooth and hairless, with slim waists, chesty, and muscular limbs.

In the ​Classical Miniatures series, Hastürk presents the miniature’s potential for both dynamic aesthetic experimentations and the representation of modern subjectivity. He shows the extraordinary properties of İznik Tile’s, which modernists, such as Henri Matisse, admired.

Hastürk’s playful attitude towards the parameters of Islamic miniature painting extends to his work in other traditional media. In his ceramics, the male silhouette with fez, which appears in Hastürk’s Warhol series, makes the leap from the gold-plated side to the pottery plate. This dynamic minimalism extends to his “Red Fezzed Figures”. Here, the familiar fezzed silhouettes appear on paper, drawn in a single gold line with only slippers, fez, and faces rendered in colored paint. Their delicate, generic expressions recall the highly codified repertoire of facial models found in Islamic miniatures.

The desire to experiment the visual and material properties of gold continues to be an important feature of Hastürk’s work. Other traditional techniques such as marbling (ebru) and gilding (tezhib) used by the artist make as much meaning for him as painting.

In his ​Mythology series, exhibited also at London’s Saatchi Gallery in 2017, Hastürk applies his mastery of the Ottoman miniature to a new kind of paper surface: the ubiquitous Starbucks coffee cup. Without fully erasing the cup’s hallmark logos, the artist incorporates the coffee giant’s branding into various scenes culled from the work of famous Islamic painters, including Abdülcelil Levnî (d. 1732), one of last great miniaturists at the Ottoman court. The twist in Hastürk’s series is that he takes an art form once reserved for a small elite audience and seamlessly transposes it onto one of the cheapest, most widespread paper commodities around.

Hastürk thereby imagines an Ottoman art in the age of mass consumption. His work transfers the elitist cultural productions of the Ottoman court into modern life and enriches the “every day” to the status of courtly patronage.

An exhibition catalogue for Onur Hastürk’s “Assimilation” has been published by Anna Laudel, please contact the gallery to obtain one.

*Content of the press release is taken from the essays by Thadeus Jay Dare Dowad written about Onur Hastürk. 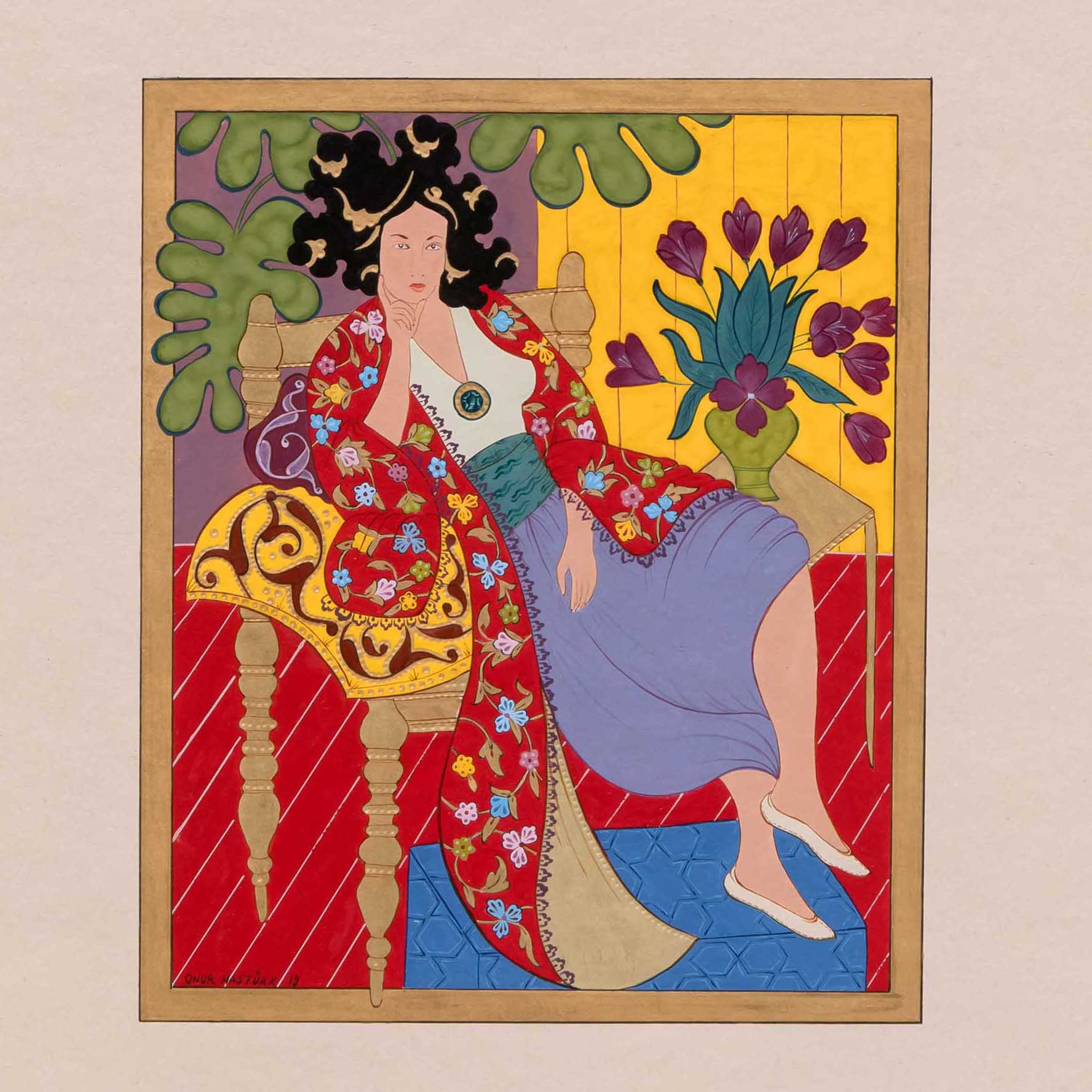 Onur Hastürk
The Lovebird And The Woman, 2020
Marbled paper cut and pasted on passe-partout
100 x 150cm