Anke Eilergerhard‘s stunning sculptures, produced by a special silicone material called “pigmented polyorganosiloxan“, evoke abundance and plentifulness, at the same time presenting the objects we know best in a way that has never been seen before. The artist, who shapes the silicone layers like a dough, stacks world renowned kitchen objects in a mysterious symmetry, almost defying gravity, out of their usual norms. Eilergerhard’s works, carefully produced with this technique, take their place in the feminist discourse both in terms of aesthetics by rejecting traditional kitchen objects identified with women all over the world. The daring works of the artist, who recently received the Tempelhof-Schönberger-Berlin Art Prize has been exhibited among many famous collections, art fairs and public space, including her collaboration with the international fashion house FENDI, entitled “The Sweet Dream by Anke Eilergerhard”, where she presented at eleven FENDI flagship stores such as New York, Paris, Milano, Berlin, Dubai, Hong Kong, Tokyo, Rome and Shanghai and 200 stores worldwide.

“Resilience”
Despite their fragile material, Eilergerhard’s figures combine resilience and resonance, elasticity, and echo. The word “resilience” derives from the Latin verb “salire” meaning to jump, to leap, to spring. Likewise, the sculptures also seem to jump and bounce. Adding the prefix “re” to the verb (re + salire: to jump back, to bounce off, to withdraw) to form “resilient” conveys an even greater elasticity of action based on space and time. The philosopher Francis Bacon used it to describe physical feedback and sound properties of various kinds. Anke Eilergerhard’s mobilising sculptural structures are also characterised by a similar resonance and the formation of a very unique vibration space.

Traditional Contrast Between Sculpture and Colour
In Anke Eilergerhard’s work, the conventional contrasts between sculpture and colour, form vital metamorphoses from one to the other, merging into dynamic clouds of color. The color hues of the three ANNAS that dance together to form the TIPPING POINT group – a cream, a pink, and turquoise- are reminiscent of an evening flight through the clouds, and stage volatility, emergence, and dissolution as if in a paradox. The artist confidently plays with the nuances of the sparkling colors of her material; the porcelain, and the more opaque shapes sprayed out of silicone. The relief ANNAS, dramatise the transitional. It occurs as a similarity in the dissimilar and lets the “power of one’s own creation” be manifested in visible forms. Colour and form merge indissolubly, delimiting each other.

In this indissoluble reciprocal relationship, Baudelaire’s idea of color as a “universe of mutual reflection and penetration, in which nothing remains isolated or untouched” is put into practice again in a completely new way: “The colours send reflexes to each other, and by changing their own appearance through a glaze of transparent and borrowed properties, they multiply and facilitate their melodious connections to infinity.”

The Baroque Fold
In a daring and ironic way, Eilergerhard’s sculptures deal with tradition – and thus with time and eternity: the lavish abundance of the baroque, it’s ecstatic staging, the baroque fold, which is also a figure for a new, fragile-systematic way of thinking, for an awareness of the crisis given the illusory character of any order, become resilient form, relief, and ornament. Anke Eilergerhard’s silicone folds, with their frills and laces, set in motion a play with opening and filling, with mirroring and theatricalization, with the excitement and tension of becoming in space. These are inventions of the baroque that the artist uses in a new and impartial way. With renewed spirit, the sinuous, spiral figure, the ‘figura serpentinata’, a topos of Mannerism, becomes suitable for the present in the works, as does the elastic, flexible figure of the rocaille, which is reinterpreted in a number of sculptures accented with daring colour contrasts.

With an enthusiasm that ignores boundaries, with ingenuity, wit, and conceptualism, Eilergerhard’s figures and objects explore surface and space, rule and chance, and the interplay of opulence and severity. In her sculptural work, there are always moments of the absurd, encounters between the unexpected, the trivial, and the precious. There are always irrationalities in the shifts and in the transplants of the materials; cunning and subversive, things settle between chaos and order, between geometry and the organic, between shimmering shine, colored patterns, or opaque monochrome.

At the same time, the seriality of the sculptures, the repetitive process of the silicone caps placed next to and on top of each other and the use of porcelain, repeatedly generates the question of difference and repetition, of their shift, displacement, and disguise, which then subvert the order of representation and common sense.

Anke Eilergerhard’s “Resilience”, her first solo exhibition in Turkey, showcases more than 30 of her new and recent productions including; sculptures, wall-reliefs, and screen printings and can be seen at Anna Laudel until 27 December 2020. 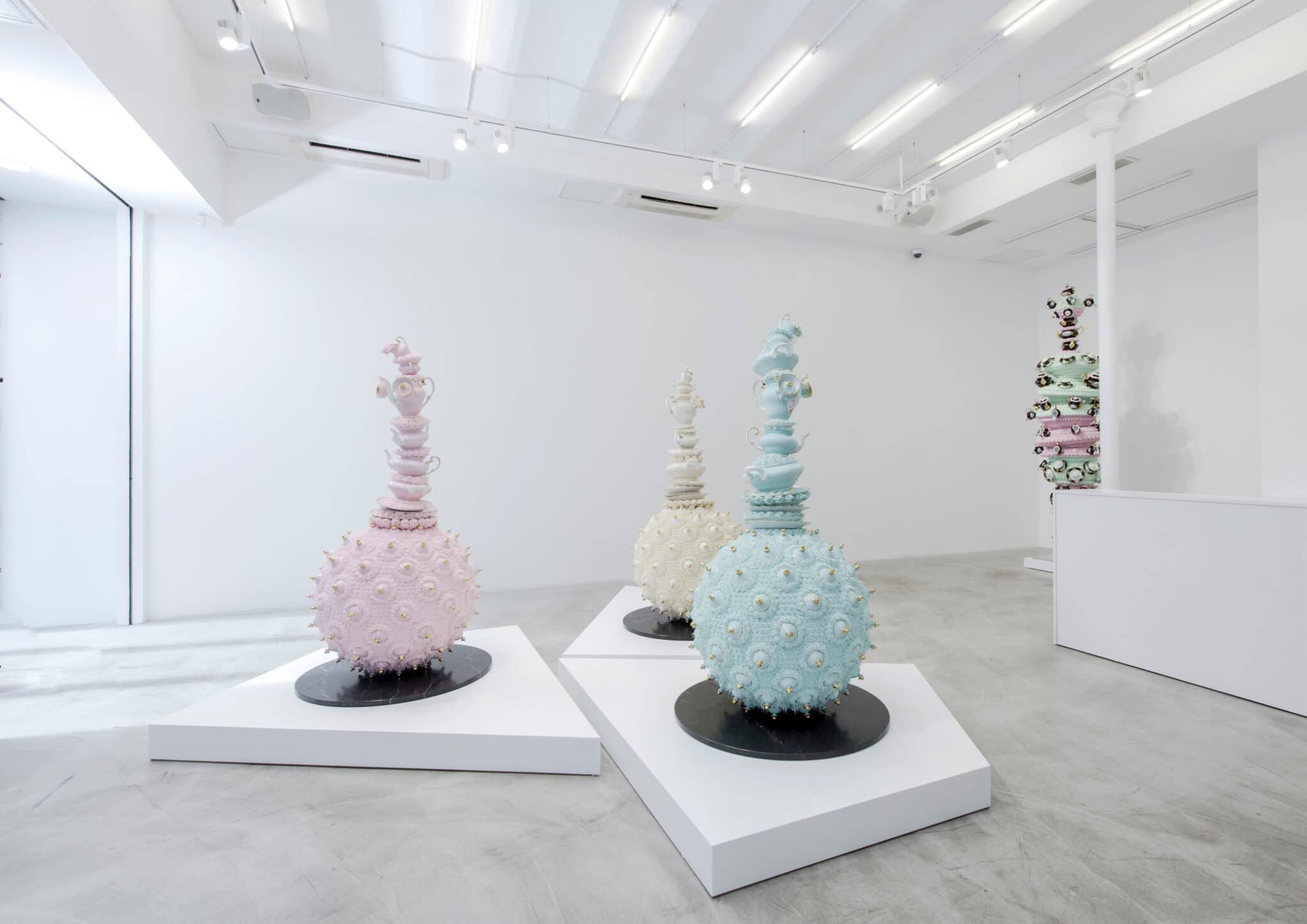 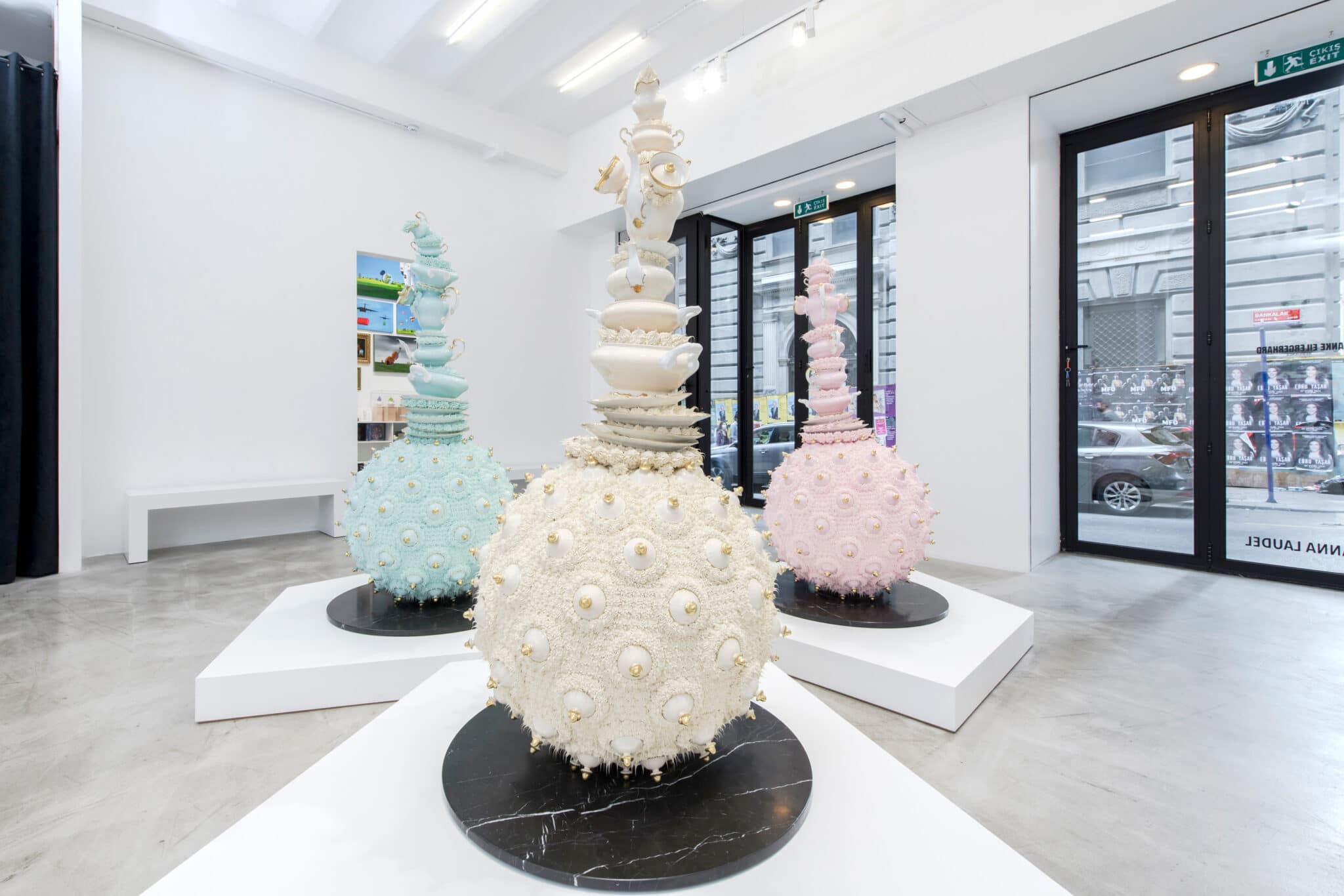 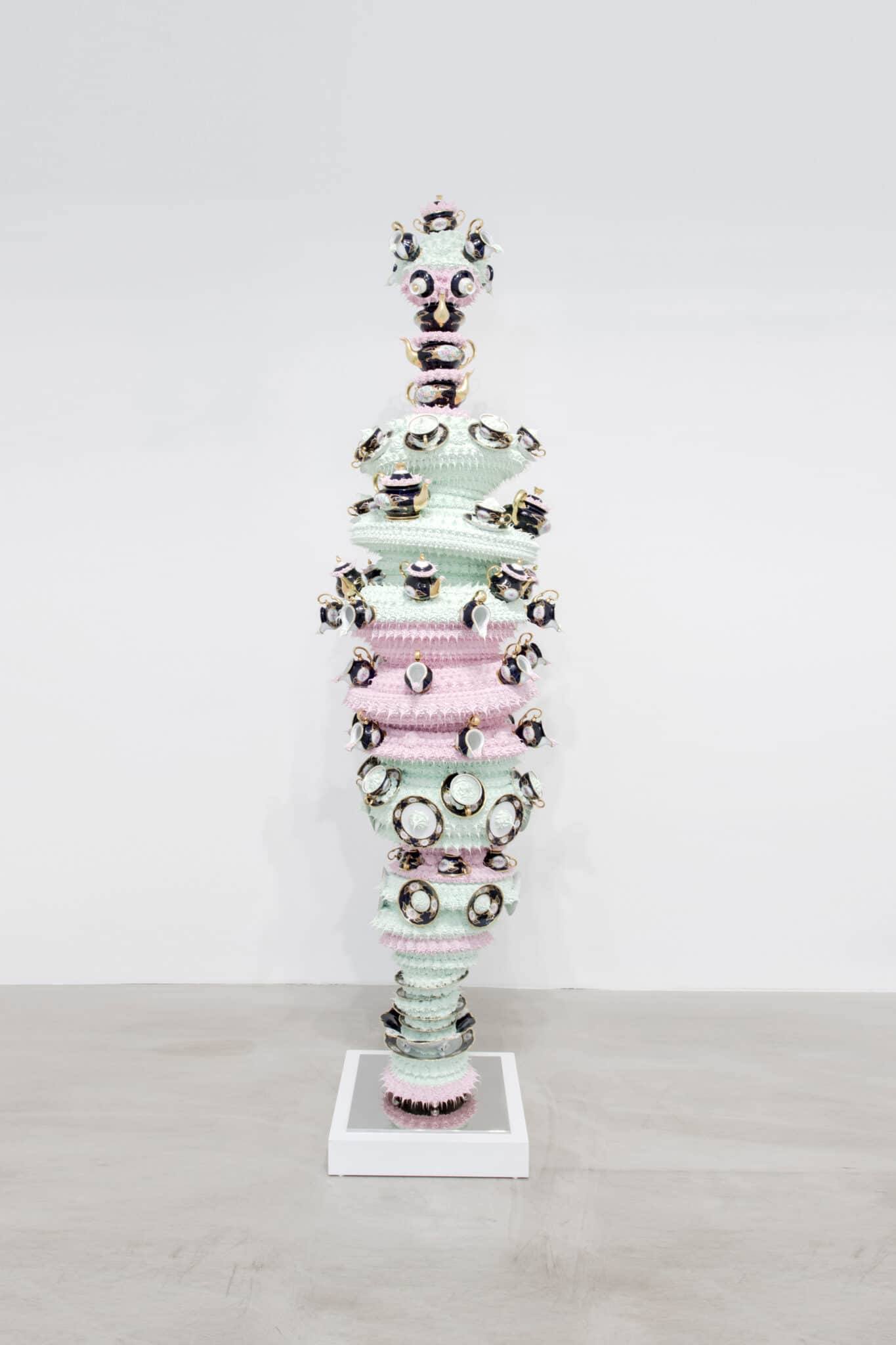 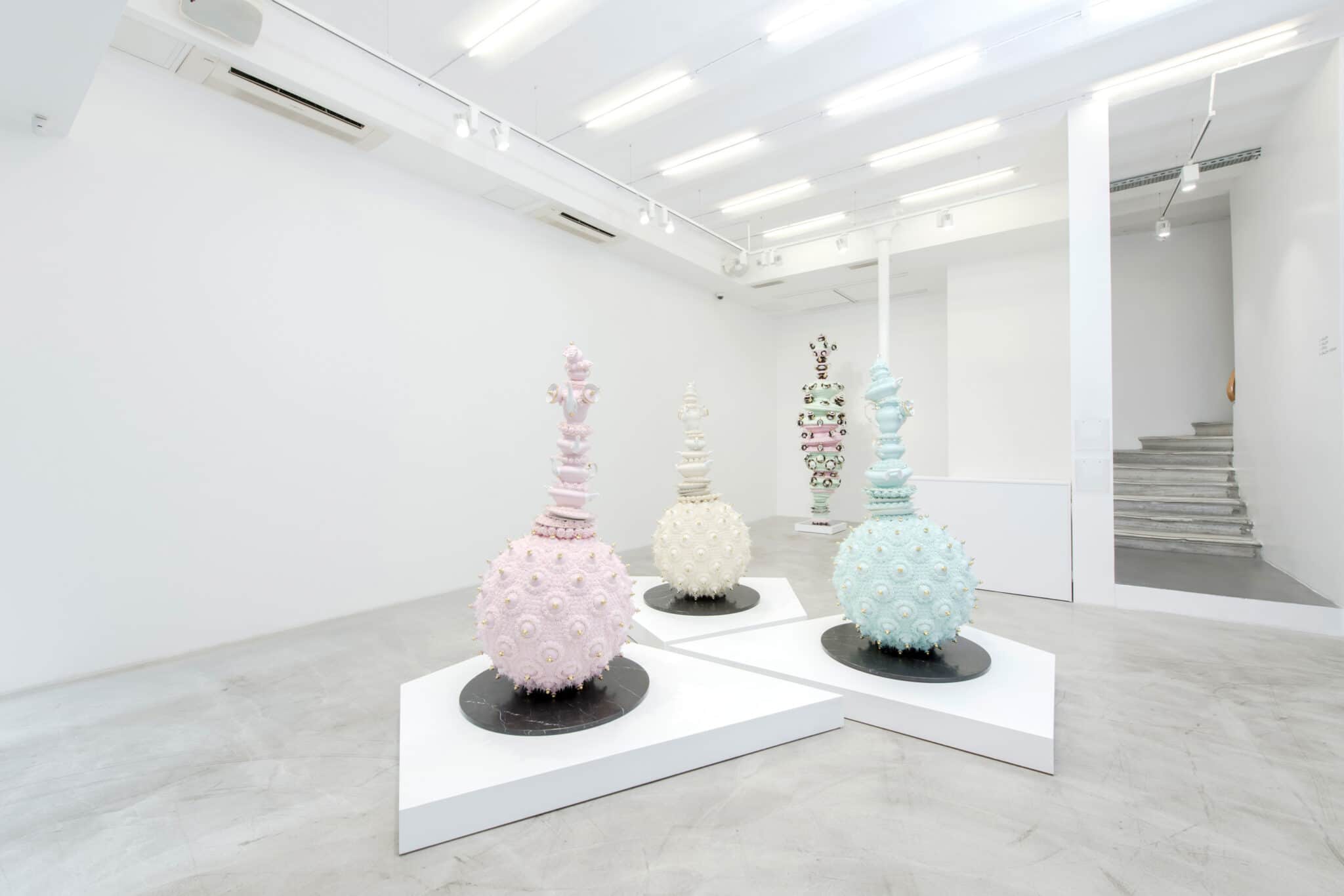 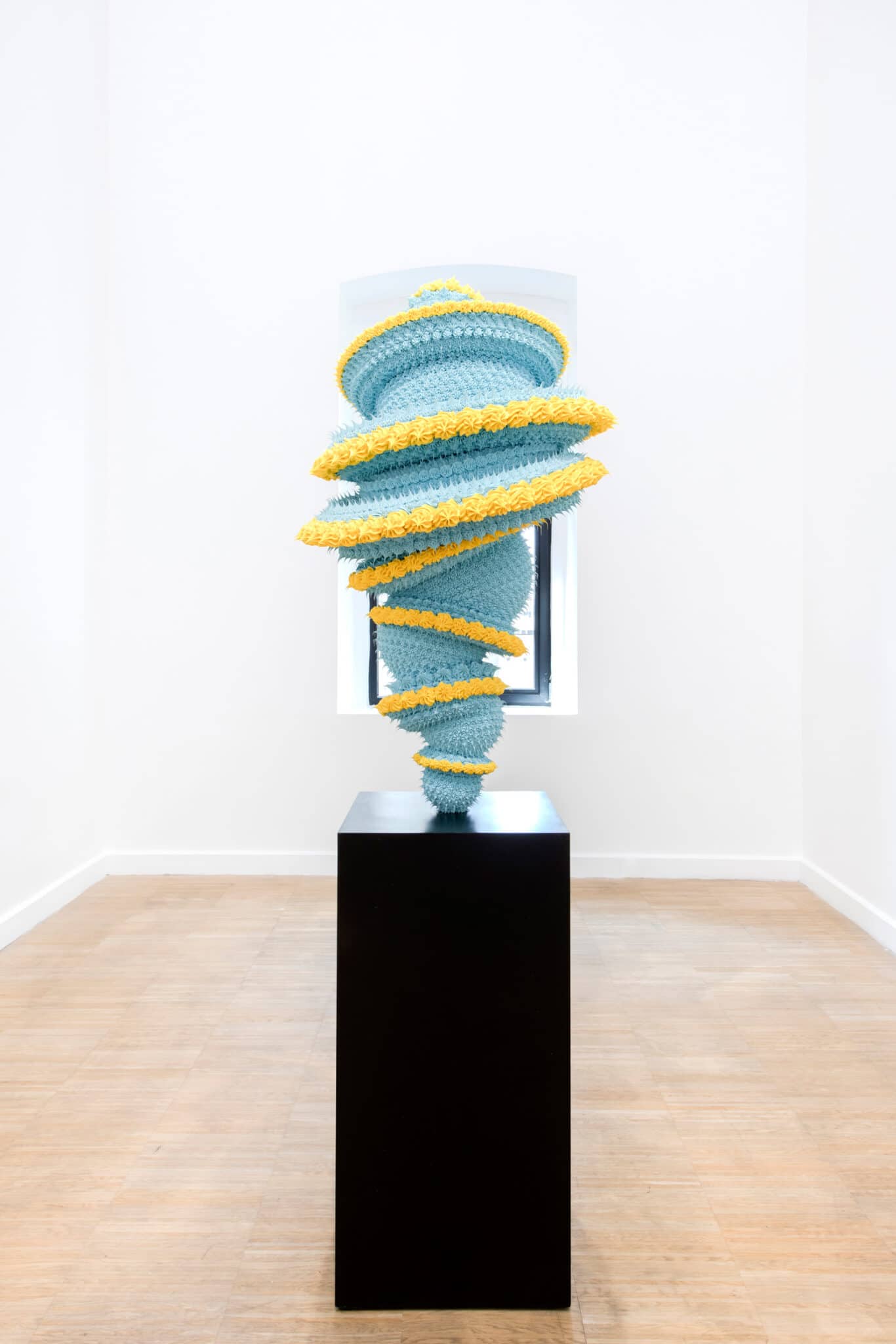 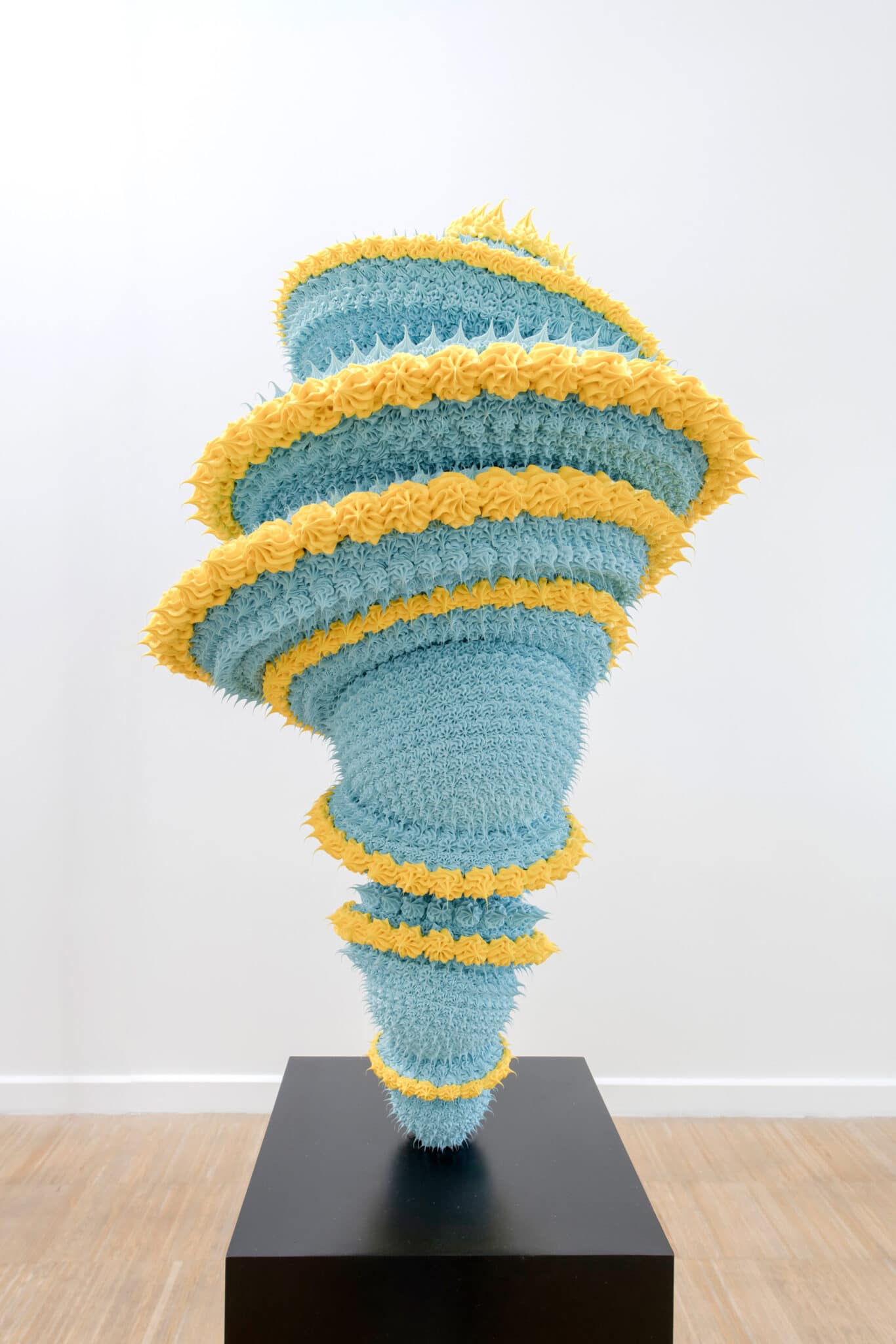 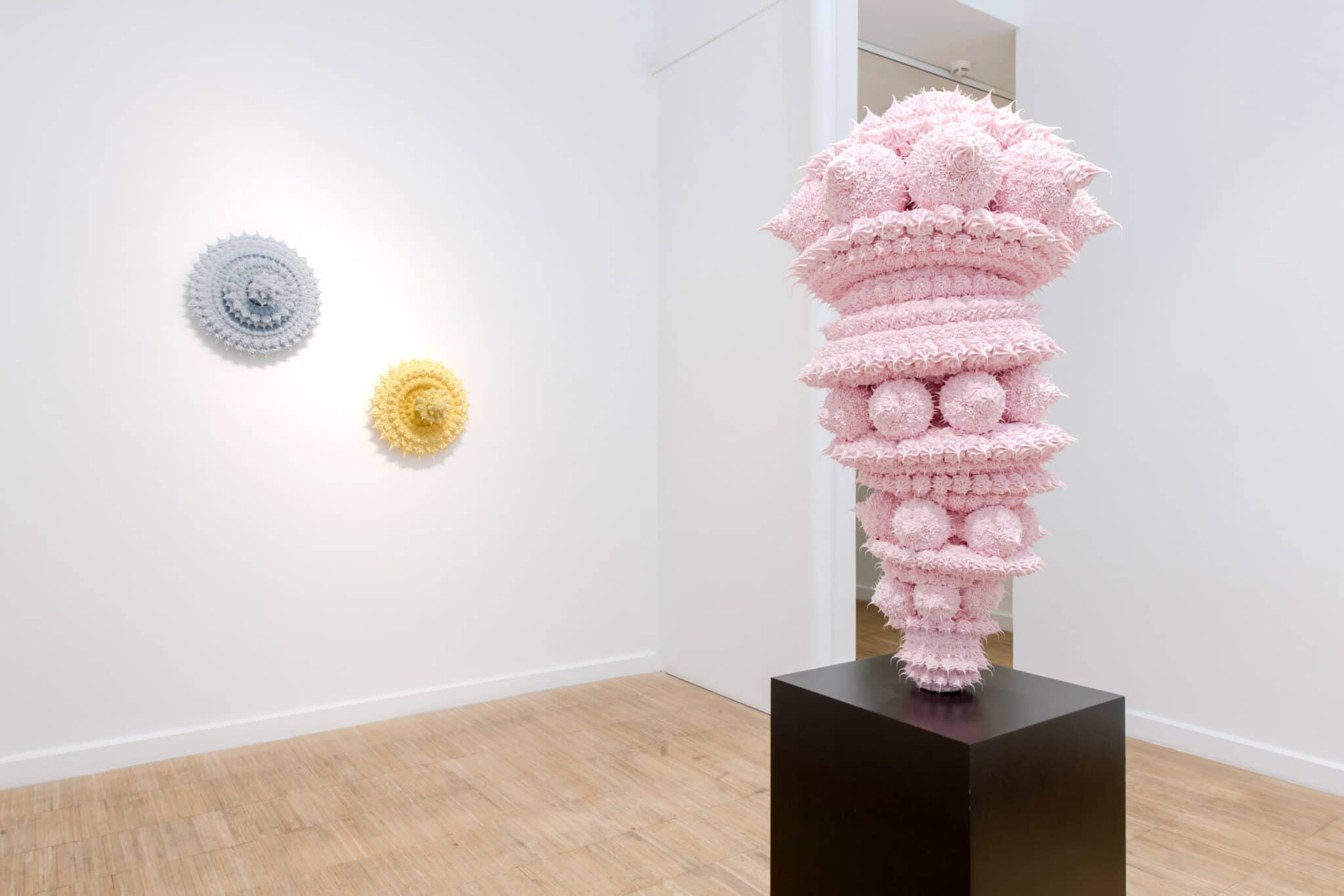 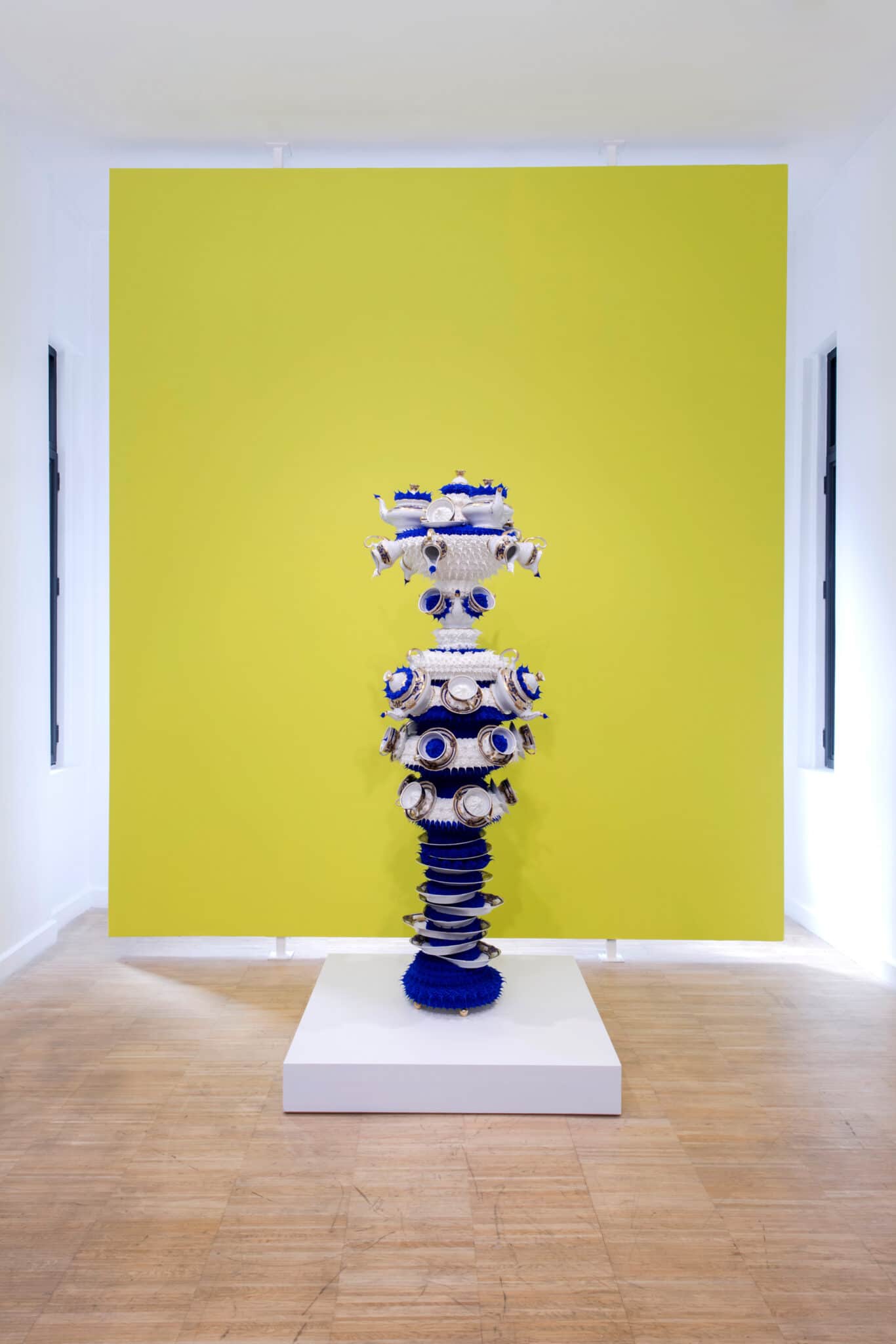 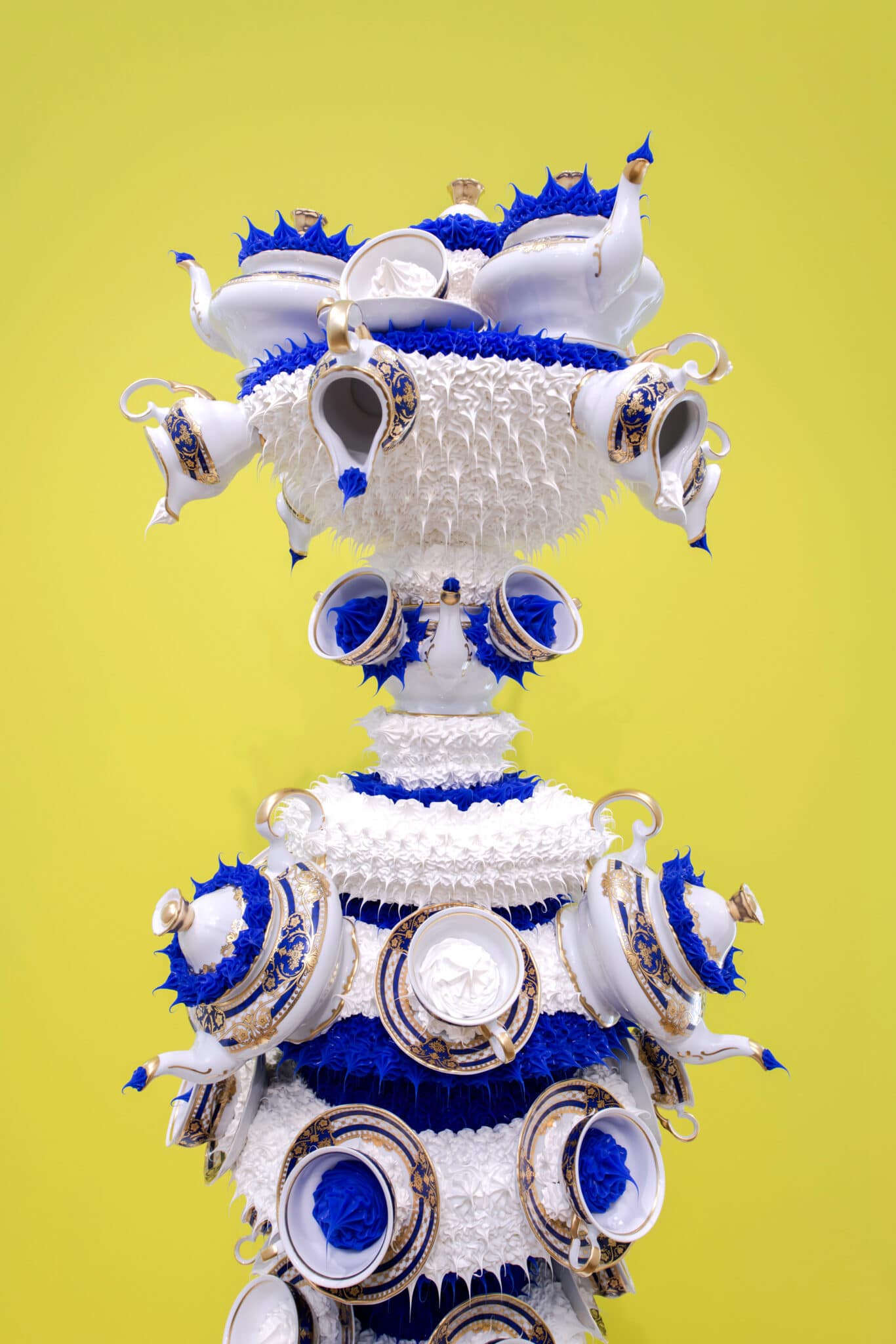 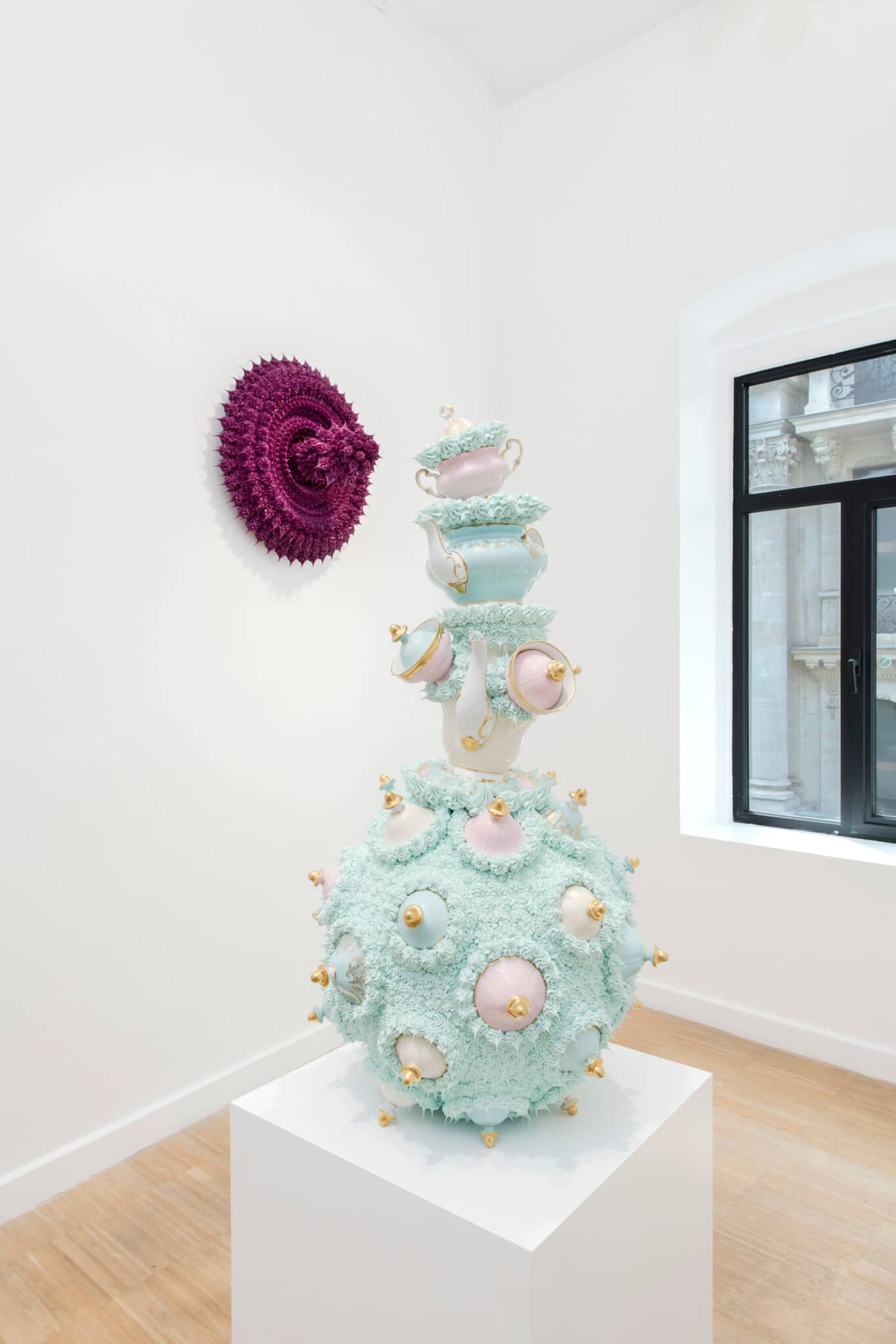 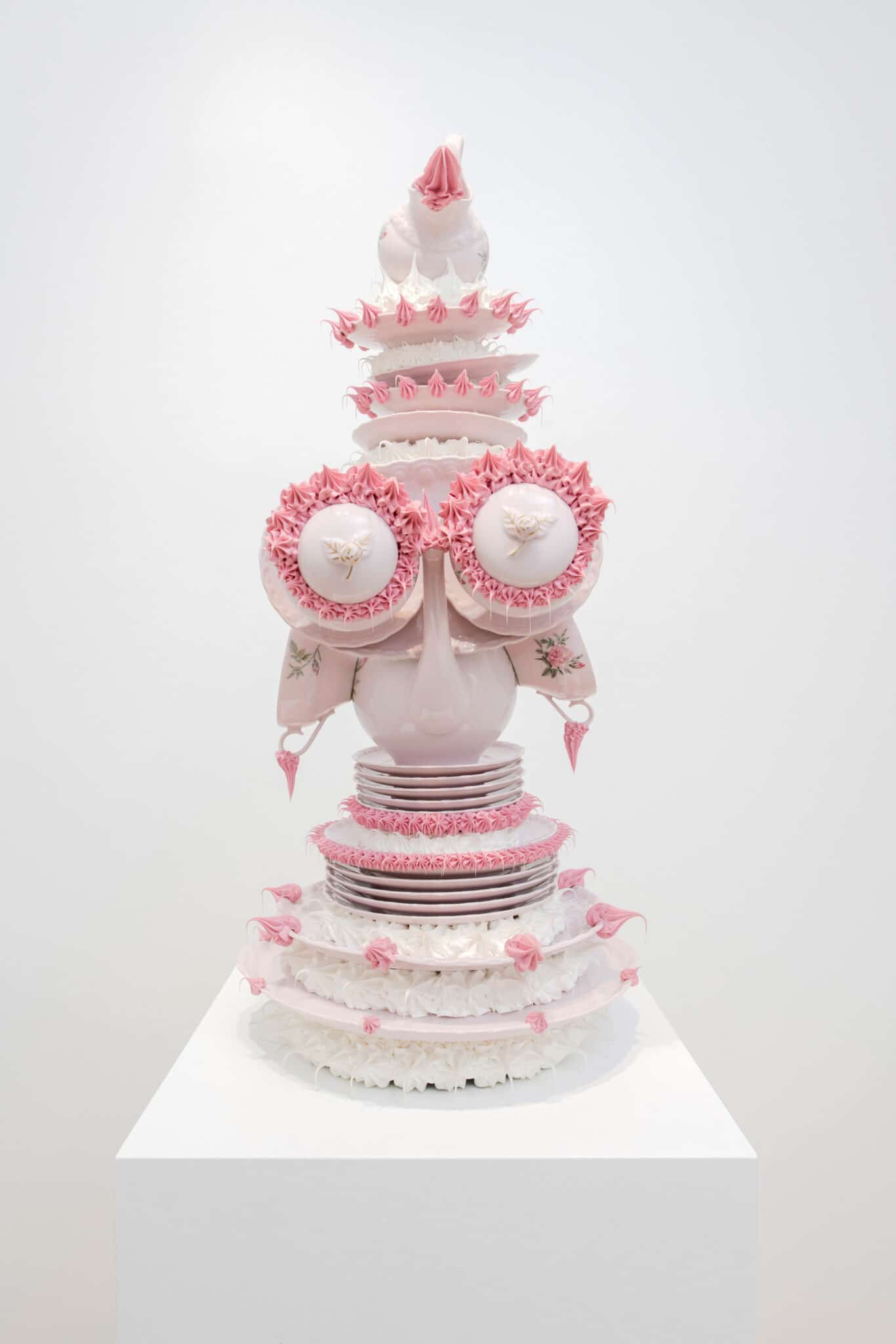 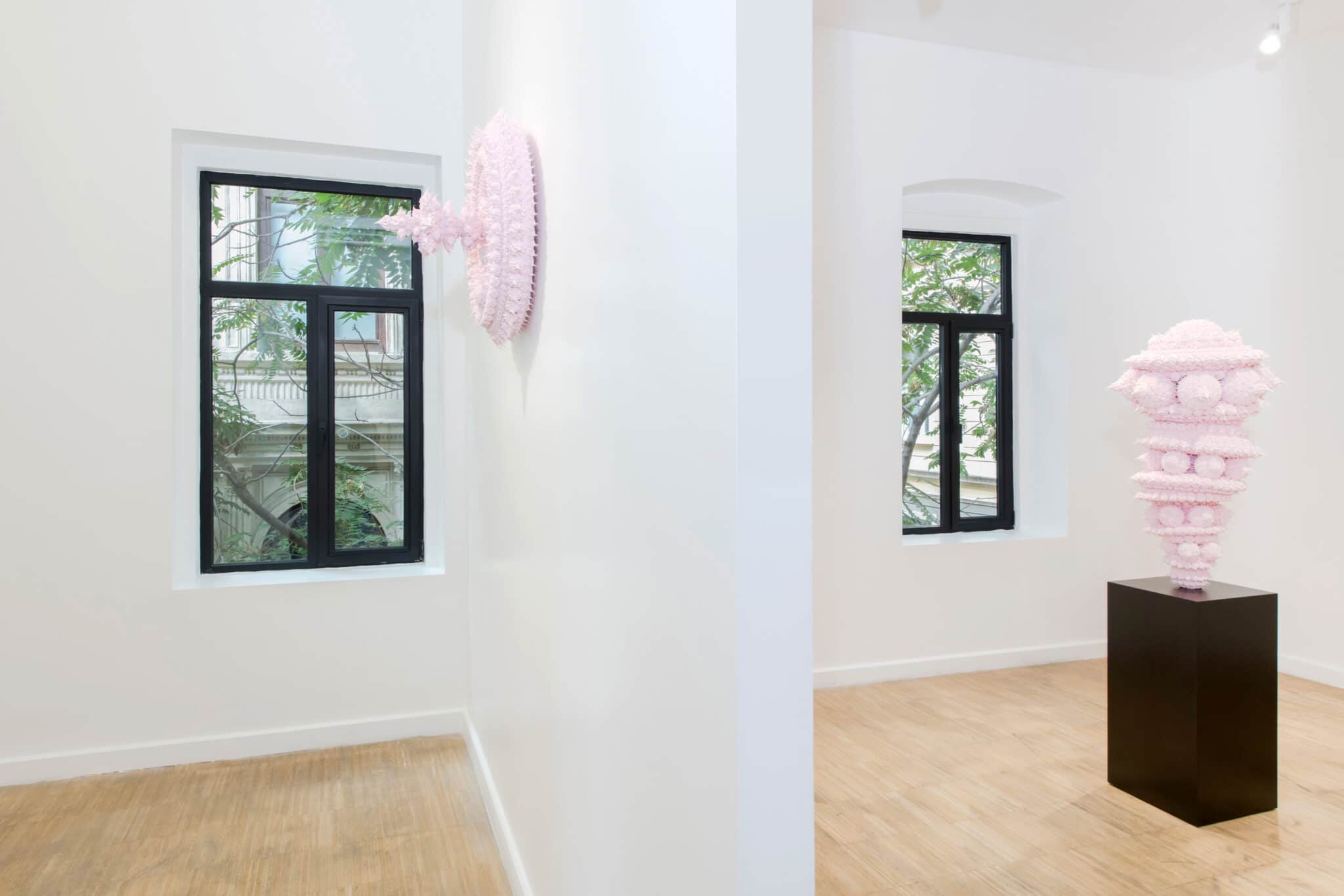 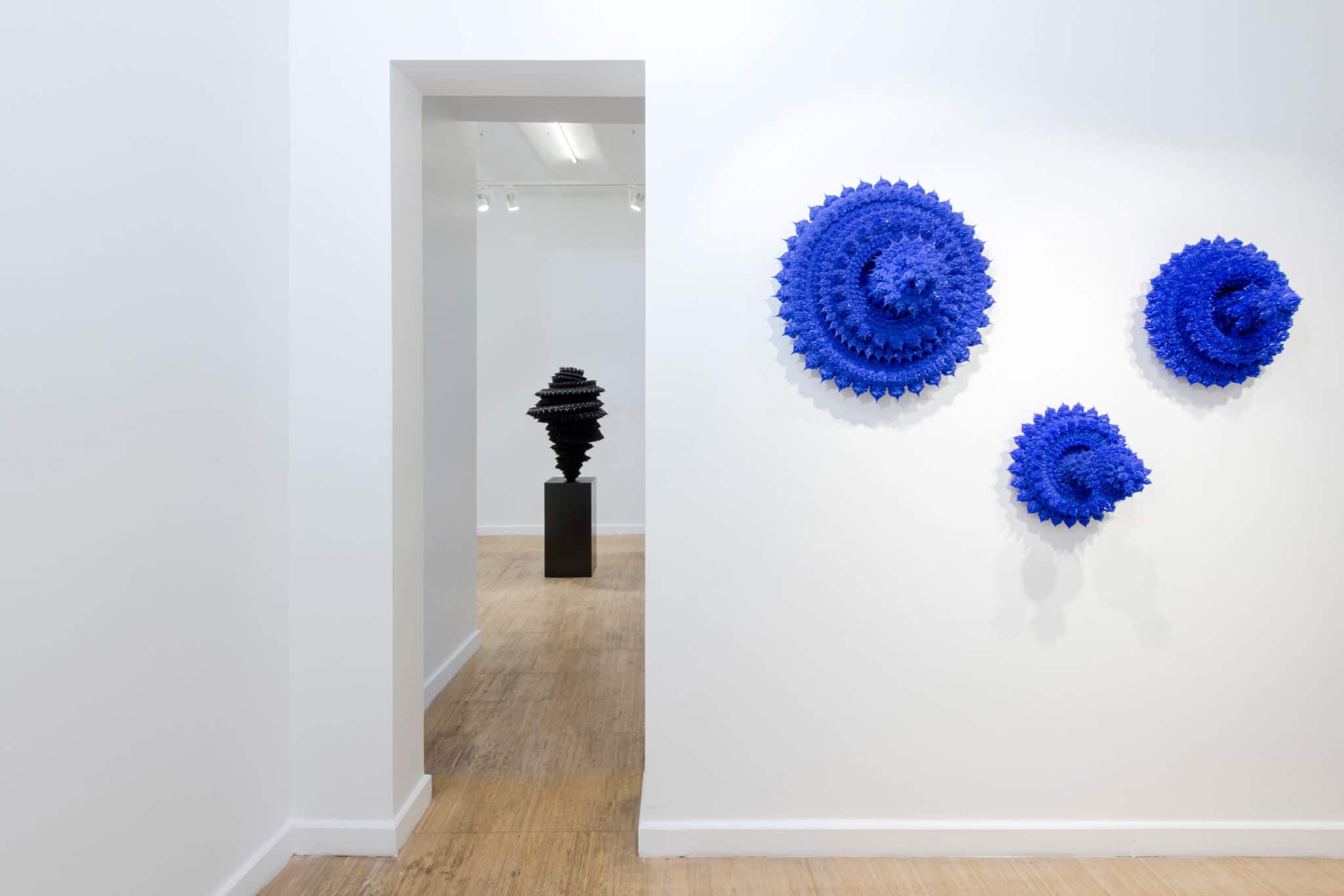 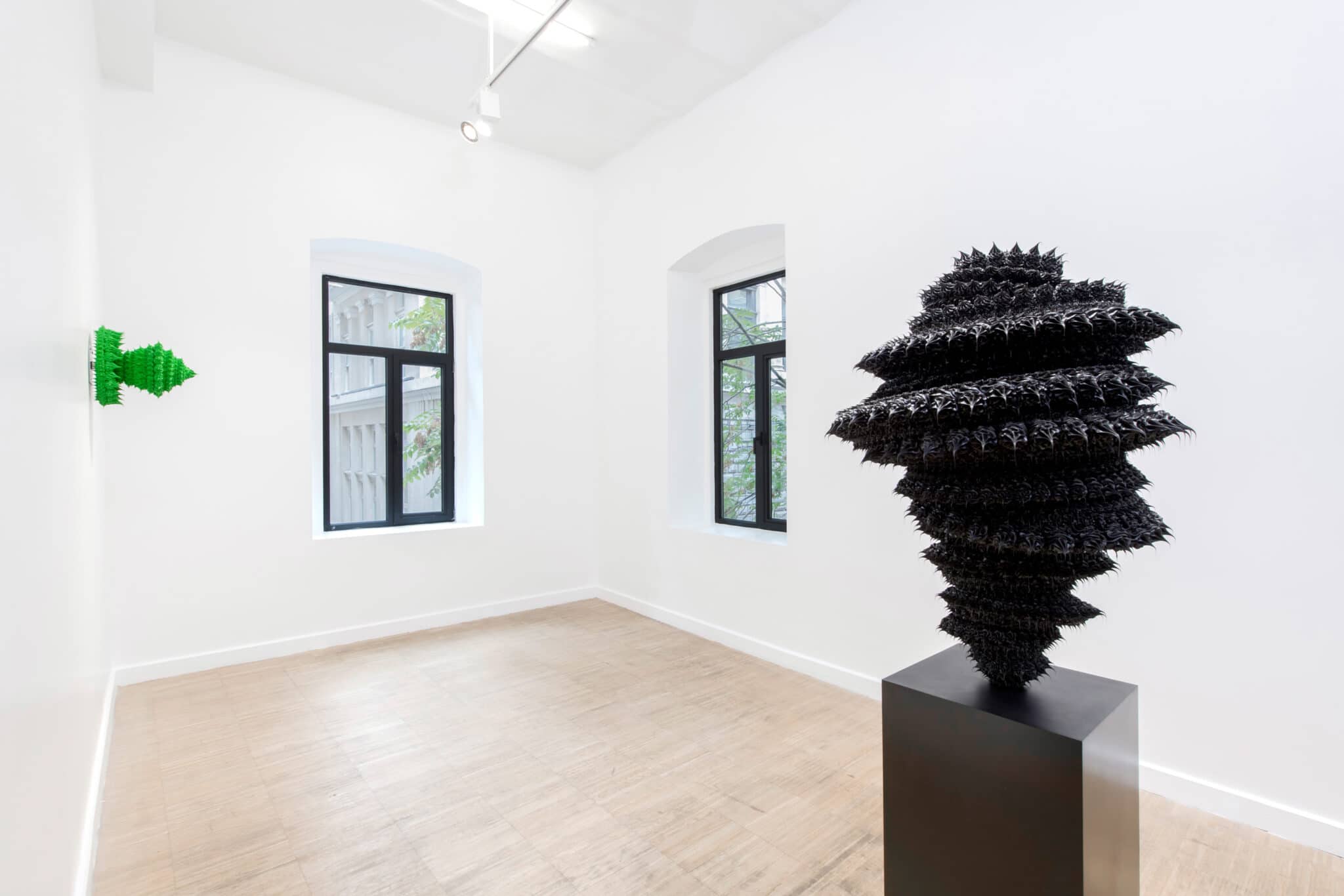 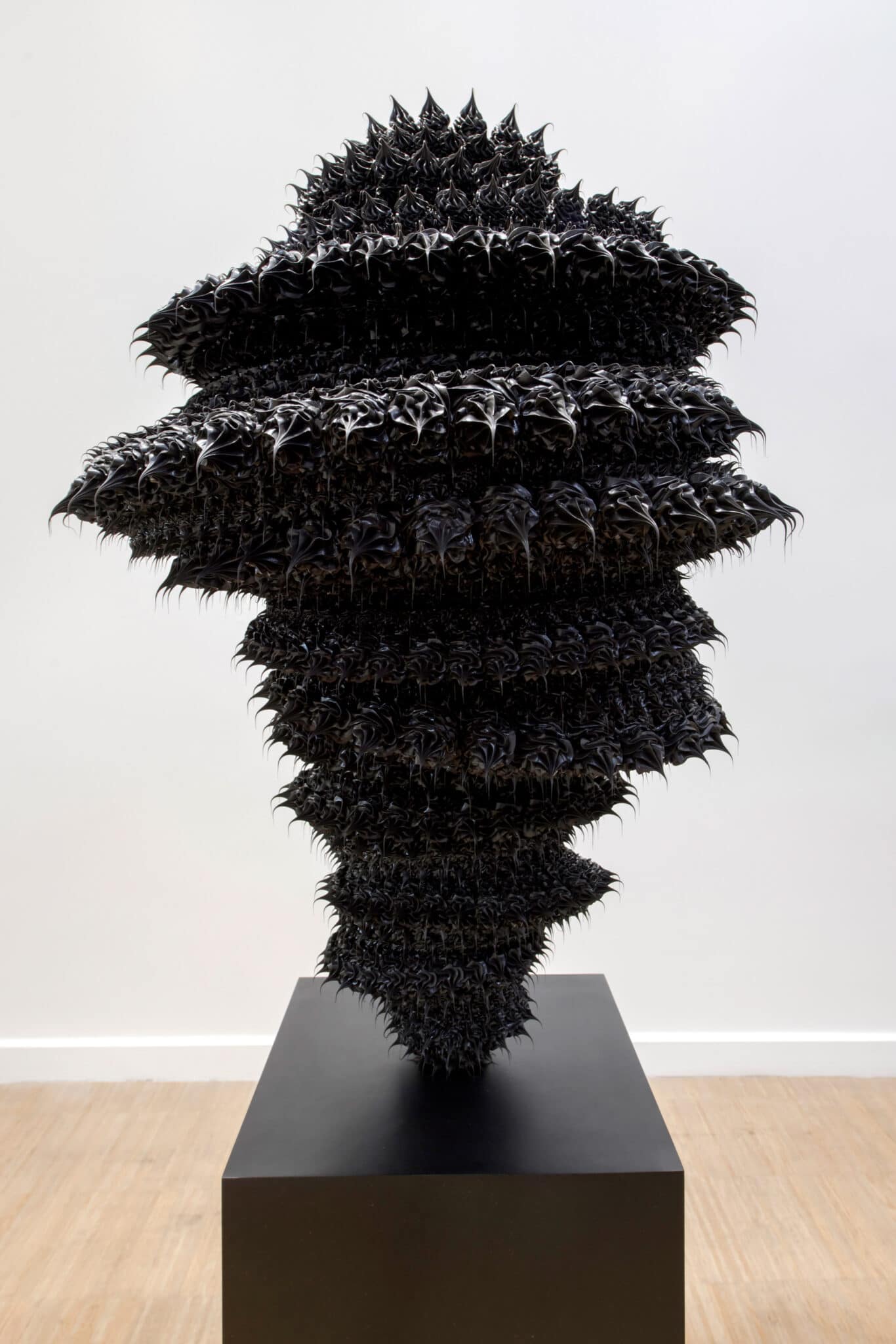 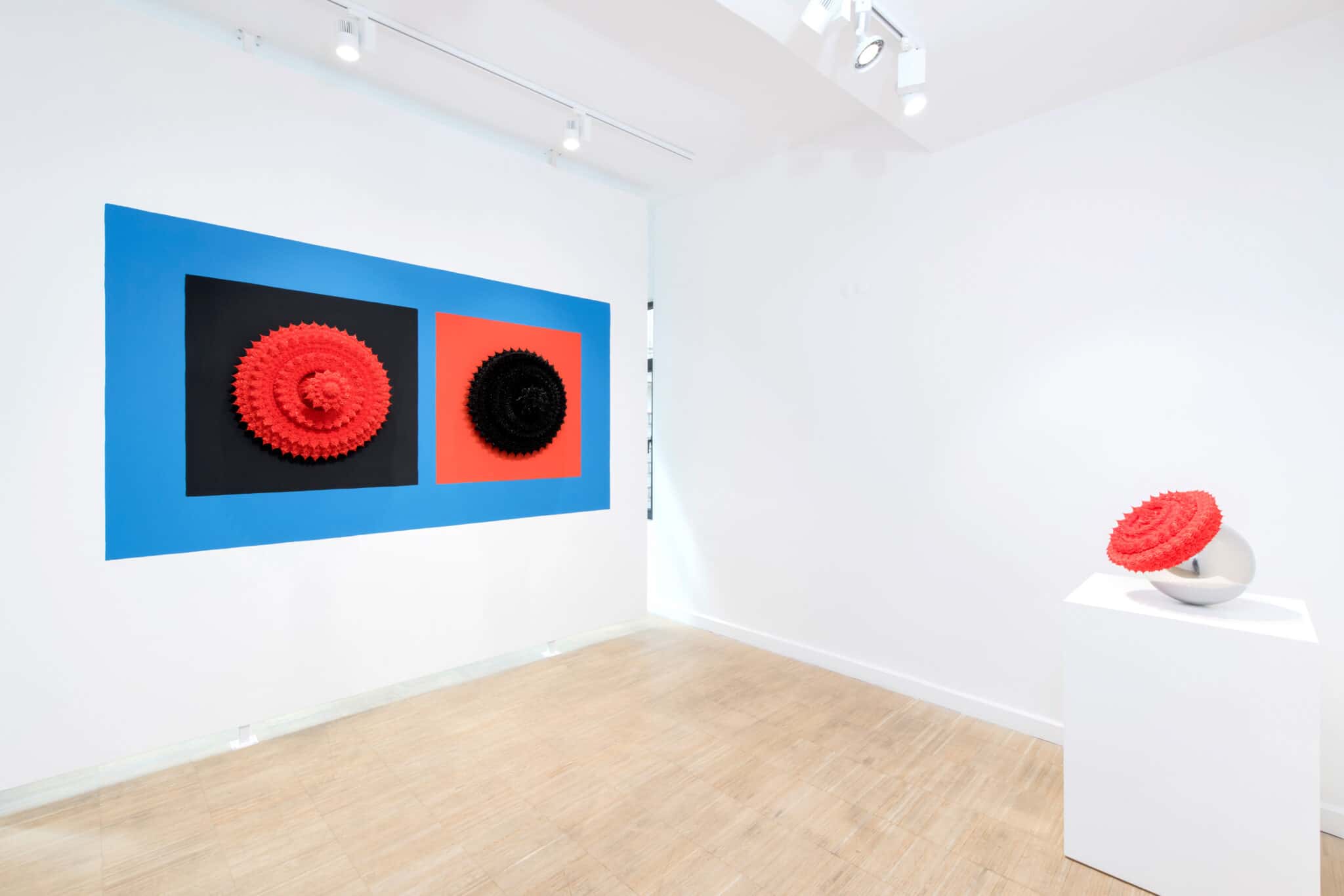 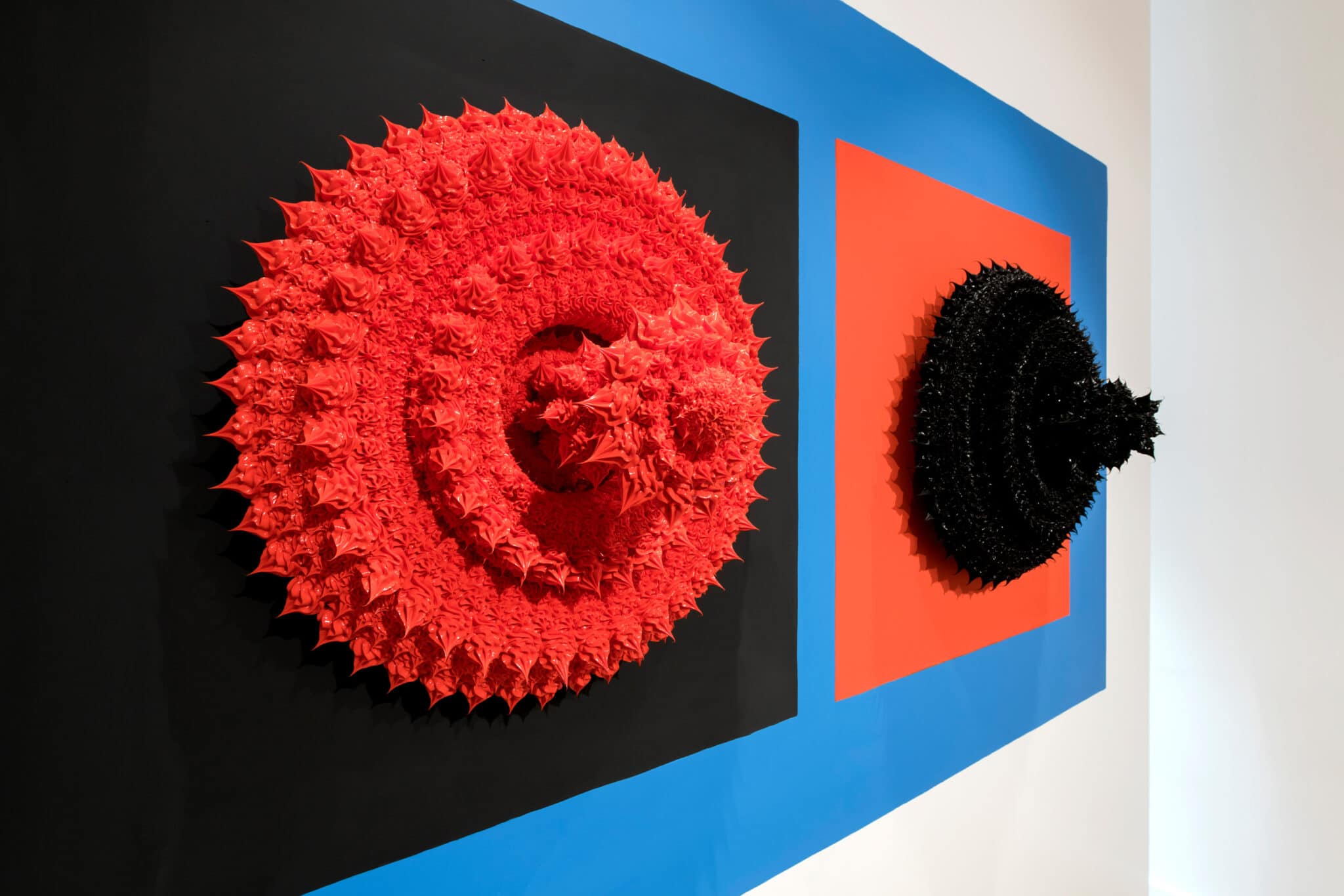 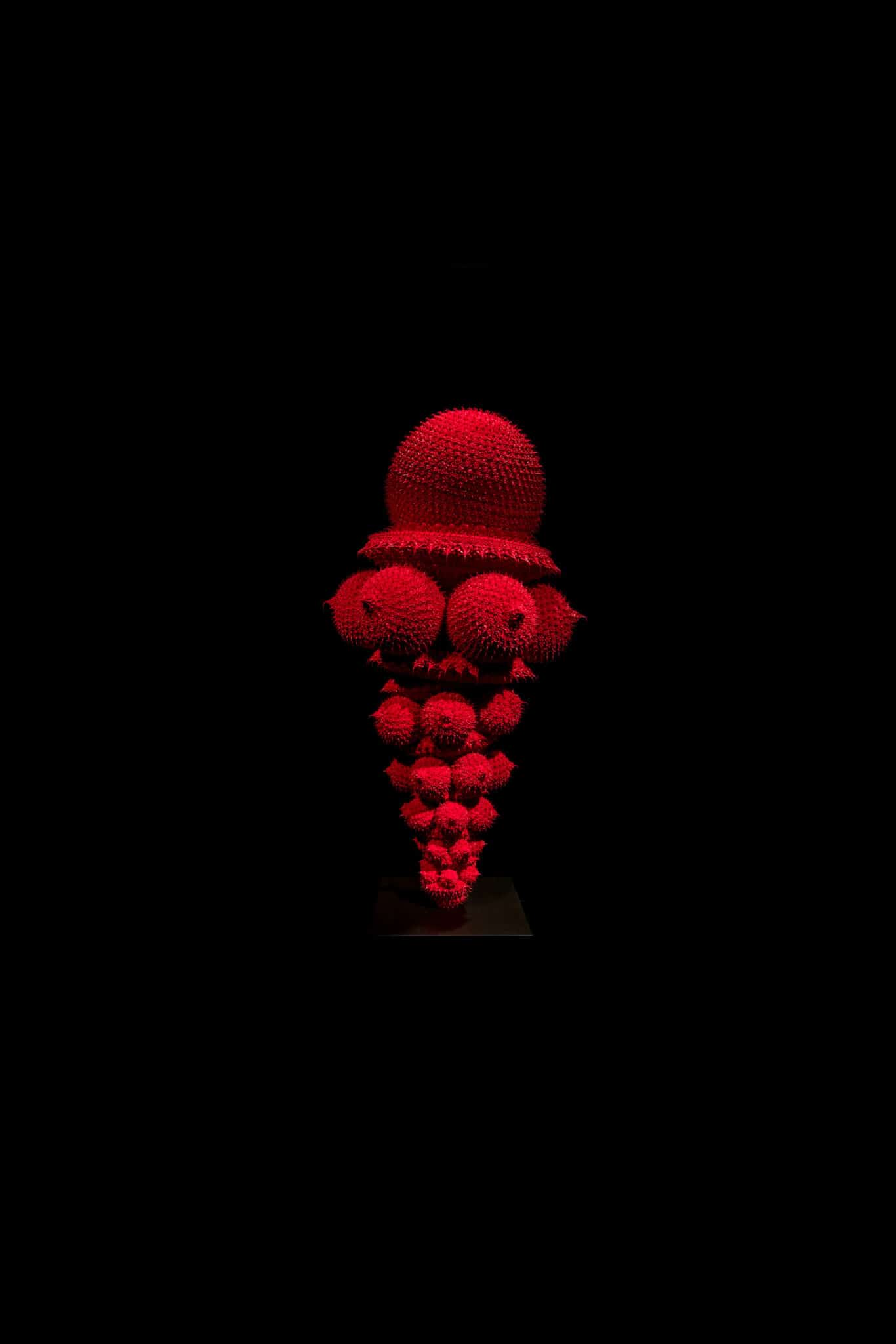 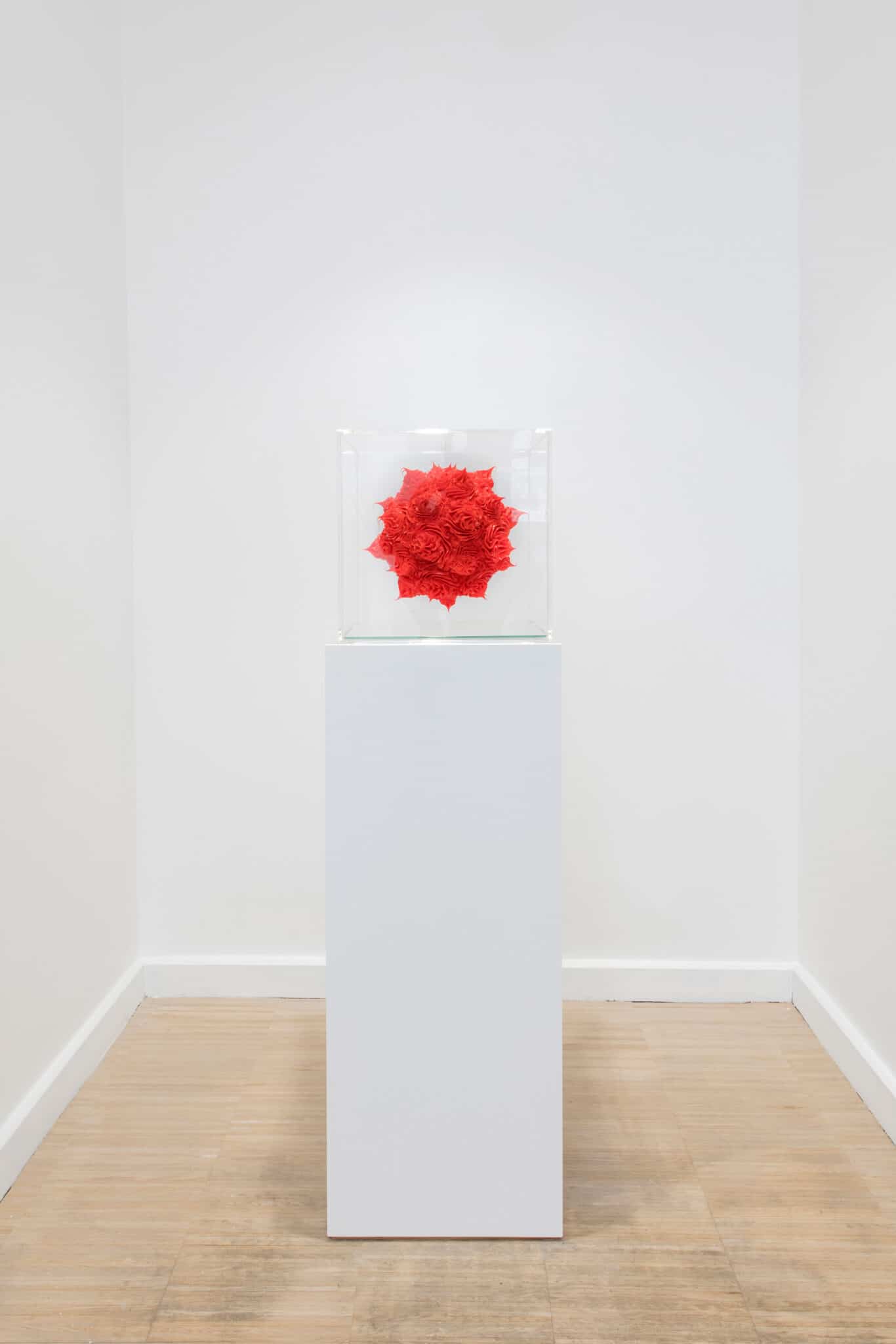 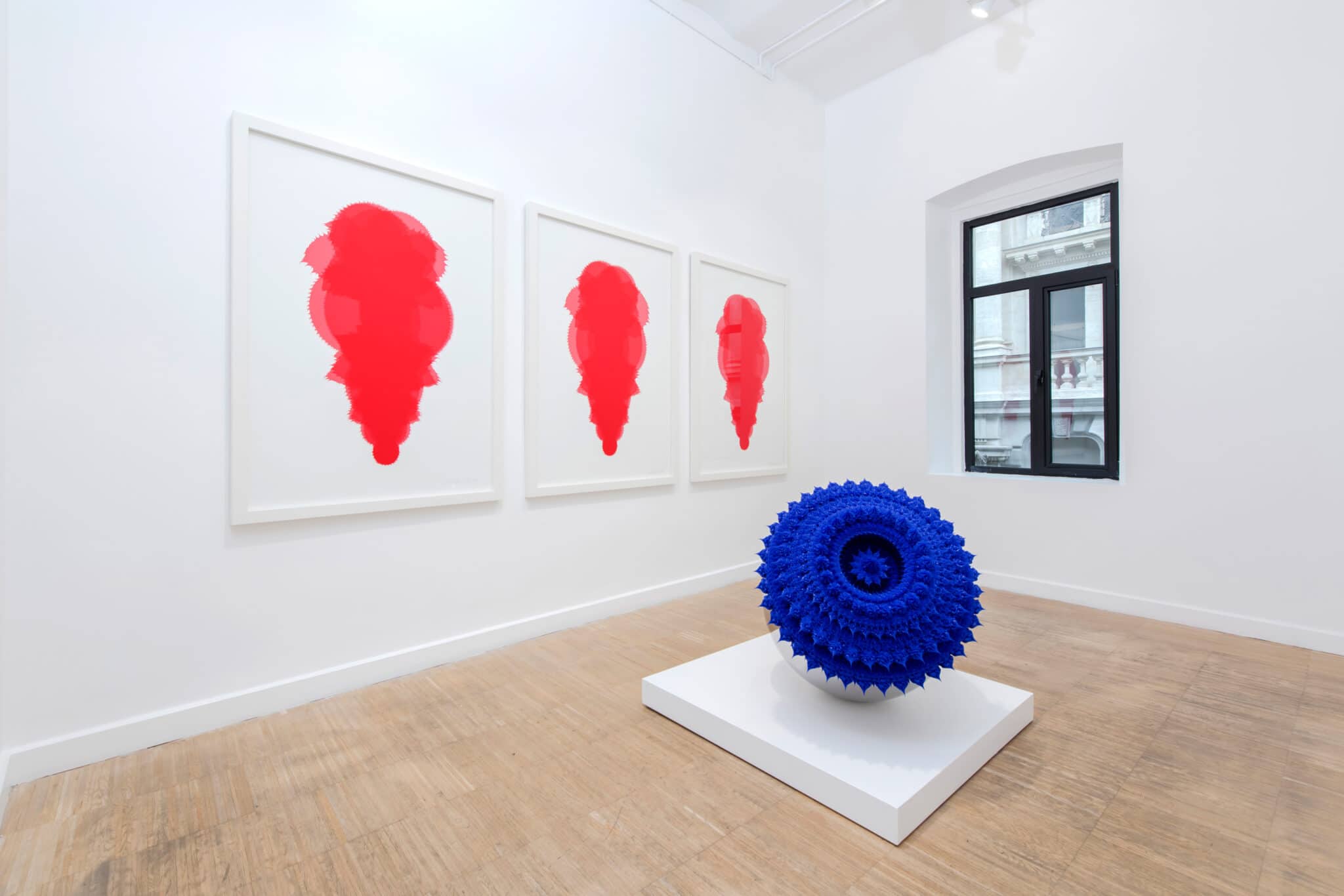 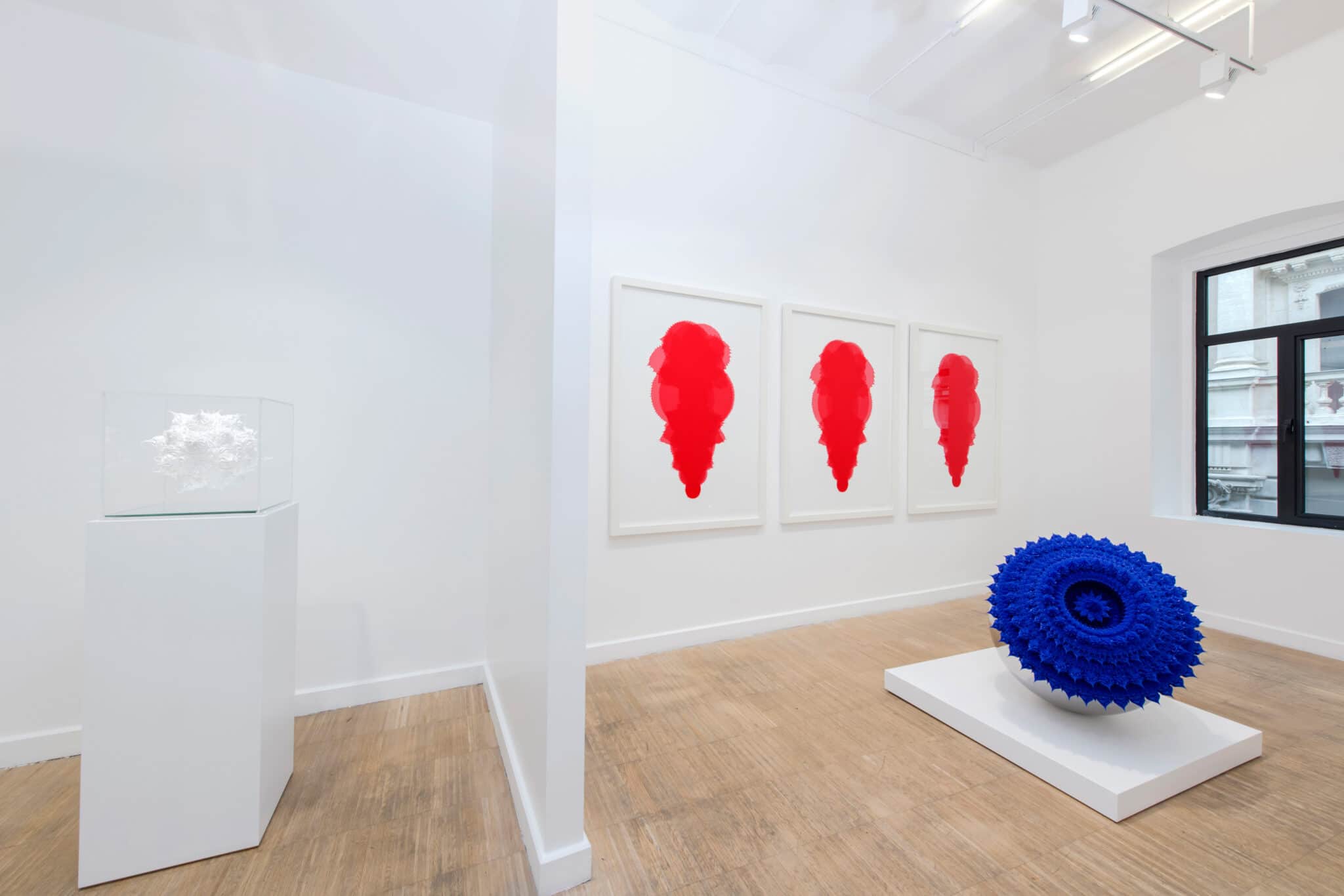 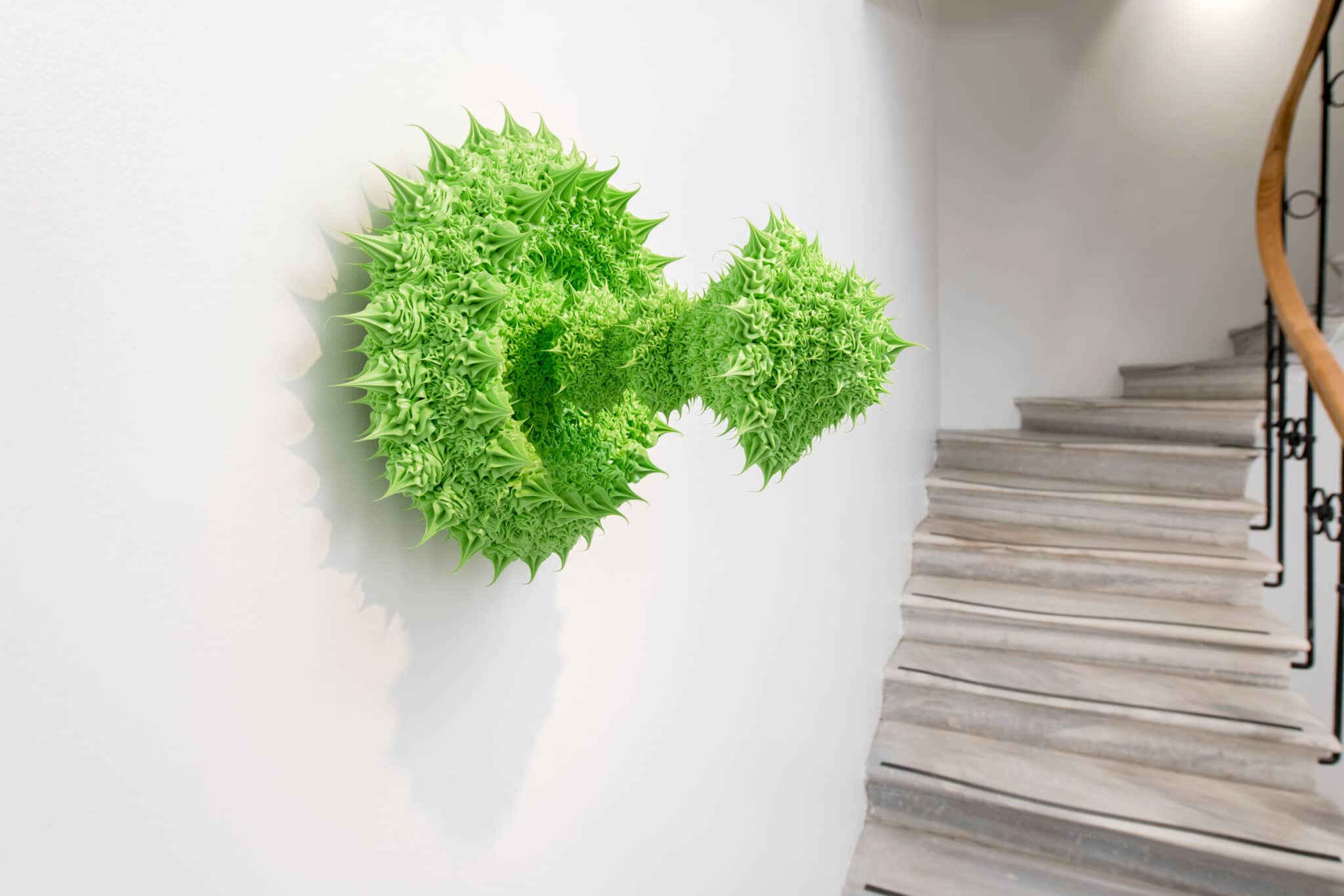